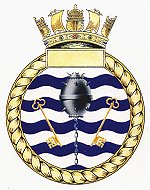 At the end of the Second World War it was generally accepted that the emphasis on mining had shifted from deeply laid moored mines to ground mines laid in the shallow approaches to ports and harbours. The large steel-built ocean minesweepers were, therefore, mostly unsuitable for sweeping sophisticated modern mines laid in coastal and inshore waters. As a result, a team was formed at Bath in the UK in 1947 to design the next generation of minesweepers. This team produced two sets of hull drawings in 1949 for the construction of future inshore and coastal mine countermeasures vessels, each hull design being further sub-categorized into two variants, namely a minesweeper and a minehunter.

Although no orders were initially placed, mainly owing to a lack of funding, the impending offensive in Korean waters led to the acquisition programme being brought forward to September 1950. The coastal minehunter variant was, however, suspended in June 1952 and cancelled altogether in March 1953, principally because of the lack of a suitable minehunting sonar at the time. Although the original names allocated to the coastal minesweepers were those of insects, this was later changed to villages in the UK ending in ‘TON’. The inshore minesweepers, in contrast, which were to have been known as the Bird Class, received names ending in ‘HAM’.

The Ton Class proved to be a very successful design with over one hundred units built in the British yards between 1951 and 1960. Over thirty units were subsequently transferred to Commonwealth and foreign navies during the ensuing years, and the same basic design was also adopted by many Western navies for their own local construction programmes. John I. Thornycroft & Co Ltd, of Southampton, acted as parent firm to the group of fifteen smaller shipbuilders responsible for constructing these vessels, which were designed to sweep both moored and ground mines.

With the exception of the double mahogany hull planking, almost the entire vessel was constructed from light aluminium alloy and other materials with the lowest possible magnetic field to achieve optimum safety when sweeping for magnetic mines. They were protected from pressure mines by their low displacement, and the threat of moored mines was greatly reduced by their shallow draught. To prevent potential damage caused by marine parasites, they were also fitted with a protective ‘Cascover’ nylon sheathing on the outer shell below the waterline.

Village names were allocated from March 1952:

The design called for an aluminium-framed, wooden planked hull with non-magnetic fittings, capable of undertaking ocean passages, and the result was a double mahogany hull with aluminium upperworks. Very sturdy craft that have been in service all over the world.

Early vessels had Mirrlees diesels, but from Highburton onwards the more powerful Napier Deltic was fitted, and eventually the original ‘TONS’ were re-engined. Early members of the class had an open bridge and the lead-ship Coniston had no top to her funnel and a short lattice mast, but subsequent vessels had a double-finned funnel top and covered bridges were progressively introduced. The last major external change was to revert to a tripod mast, for a new radar.

In 1964 Kirkliston was converted to a ‘minehunter’, with LL sweep gear removed and a minehunting Type 193 sonar installed in the hull beneath the bridge. Active rudders were fitted to allow her to position herself over the mine, and four divers and two inflatable boats were carried to permit the mine to be blown up by hand.

In Shoulton (who was converted to minehunter in 1963) an auxiliary diesel-hydraulic pump-jet system was installed in 1967 to provide quieter propulsion.

Another fourteen were modified to minehunters, some with the Sperry Towed Acoustic Generator (TAG) others with the Multiple Towed Gradiometer (MTG).

Iveston was fitted with Sonar 193M in 1971. It was the Plessey Company’s modernised version of the old 193 & was to be the prototype for the Hunt Class 193M Mod 0 & then 193M Mod1 sonar. She was attached to the 3rd MCMS at Portland for acceptance trials from 1972 for a couple of years before rejoining the Fleet in the 2nd MCMS.

Two, Edderton and Sullington, became the survey vessels Myrmidon (20 July 1964) and Mermaid, while Invermoriston became an air-sea rescue vessel and Laleston was converted to a diving tender.

Myrmidon (Edderton) was later sold on to Malaysia, in 1969, to become Perantau ( This means ‘A Rover’).

The French, Canadians and Dutch were given the drawings to copy.

Late in 1971, five were converted to coastal patrol craft with ‘P’ numbers – Beachampton (P1007), Monkton (P1055), Wasperton (P1089), Wolverton (P1093) and Yarnton (P1096), and a second 40mm/60 Mk 7 fitted abaft the funnel; All five were sent to Hong Kong. These Ton class Minesweepers were superseded by the Peacock class, more specialised for the job, but they provided excellent service whilst they were there.